So here we are, it’s Good Friday. It also happens to be my 46th birthday, but I feel more melancholic than celebratory. Today, of all days, is an opportunity for me (and all the other millions of Christians) to reflect upon the crucifixion of Christ, and what that means in our lives; and we have just marked the close of Lent; the 40 day period of reflection and penitence. leading up to this Holy Week, including Good Friday and Easter Sunday with its celebration of the Resurrection. (And THAT’S the time for the chocolate eggs, yiya!!)

Many of us will have observed some small sacrifice in the past 6 weeks to mark and make a little bit more real this solemn period. We can interpret this “Lenten vow” as a promise made to deny ourselves something that we might suspect holds too much power over us in our daily lives; something that would actually cost us something to give up. When I think about it, that’s pretty counter-cultural. Denial of self is not popular. So..a couple of years ago I gave up sugar for my Lenten vow; last year I put myself through a rigorous period of daily reading and prayer simply because I’m pretty bad at spiritual self discipline. This year I gave up two things; red meat and my reliance on social media. The red meat I haven’t missed at all..not much of a sacrifice, then! What about the social media then? Ah..not so easy.

Why did I think this was a good “sacrifice” to make anyway? Overall Facebook, and to a lesser degree, Twitter, have improved my life, not stolen from it. Social media affords me a lot of pleasure, engagement and opportunity for reflection, and even tears. I keep in contact with family and old friends (almost all of whom I only rarely see in real life), I get exposed to article and opinions that actually help me to work out what I really think about the world and the people in it. Not infrequently, I find  out news through social media well before it appears in “The News”. I respond to personal messages on FB more quickly than on email and by phone.

Sure, most of us know there is no time-killer as effective as Facebook, and social media generally. (As if to underscore this point I have just sent 32 minutes Googling for the awesome cartoon I saw ages ago featuring the lone person on Facebook and the gargantuan gulf between that person and their hopes and dreams. I wish you could have seen it. Truly.) And then there is the bigotry and closed-mindedness even from people we love. And not to forget the insufferable smugness of those who claim moral and political high ground; the vapidity and frivolity of those seeking to shore themselves up by Facebook validation. Of course, it goes without saying that I myself don’t fit any of these categories. Not at all.

What a load of bollocks. Of course I do; I fit all of them. In fact my use of social media reflects back to me things about myself I would rather not acknowledge; moments I would rather keep secret. Those times when I have hovered over posts, waiting for likes, comments and shares. The times I have lovingly crafted seemingly casual put-downs of other people just to show my superiority. The times I have wrestled with someone I don’t know about something I know little about (and care less about) just to be RIGHT; or even worse; just to see my own post (thus hear the sound of my own voice). The moments I caught myself thinking in status updates.

None of these things are grave sins, and I am no different to other people I’m sure. But it’s instructive that people often refer to Facebook as ‘addictive’. Well, I’m not sure if it is the flow of information we develop addiction to. In fact I’m sure it’s not. The addiction might well be real, but it’s not to Facebook, or any other SM.

I realised I needed to make my SM use the subject of a Lenten vow because of one thing; I was putting myself at the centre of the world. Or perhaps to put it another way, I was becoming a kind of Narcissus, the beautiful young man of Greek myth who, catching sight of his own reflection in still waters, fell in love with his own image, believing it to be a nymph in the water watching him with love and desire. Every time he reached for the image it shimmered and broke apart,so he just sat and watched the image; enamoured. Ultimately he died; still rapt in the facsimile of himself and its false love. 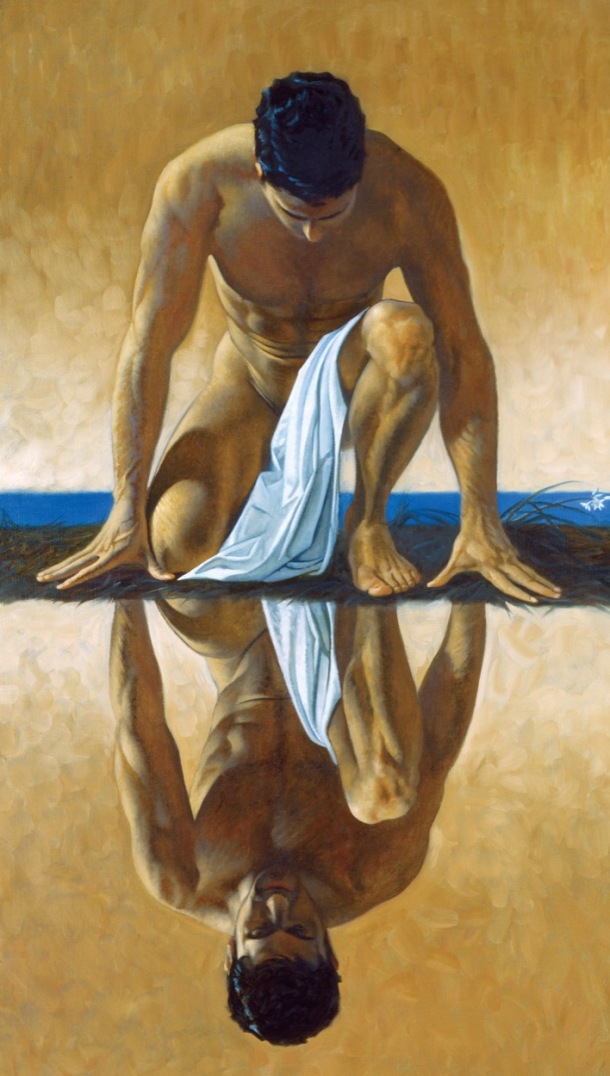 By its nature social media gives us all the opportunity to present our ‘better selves’ to the world, and then to cultivate and groom that better self as if she actually existed.

This is not in itself a bad thing. Obviously any time we present ourselves to the world we edit what we show; when we walk out the door; on the bus, and in the group email at work. Self editing is necessary for good social intercourse. And for those of us who do want to blog or write or otherwise put our opinions and thoughts in the public sphere have to put ourselves at ease in putting our public self ‘out there’ or else not bother. We have to believe someone else is interested in what we have to say; and that what we have to say is worth saying. There is a fine line between having that necessary degree of confidence, and slipping into the kind of dangerous self-regard I was starting to see in myself. And of course, this shiny coin of attention is double sided. One side is the adulation we crave from others, the other is the hatred we might also attract.

The irony of writing a post bemoaning self-addiction by writing mainly about myself is not lost on me. Regardless, 6 weeks without seeking likes, and shares and comments have done me good. I hope I can return to social media with care. Perhaps the proof of that particular pudding will be in how often I find myself hovering on my stats page for this blog, seeking evidence of love and approval from the universe.

Happily Travelling in New Zealand
Psychology in an Indigenous world

Coping with depression through prayer, poetry, and flying plastic

Revitalizing the Christian imagination through painting, poetry, music, and more

Tracing the identity of Jesus through history, art, and pop culture

An Episcopal Priest's Sermons, Prayers, and Reflections on Life, Becoming Human, and Discovering Our Divinity

Talks and writings by Pala Molisa