Twitter Facebook RSS Feed
← Banning Karakia in schools? A cultural can o’ worms, or beat-up?
The Kermadecs, a fishing settlement, and the Long Forgetting. →

This is the text of a post I wrote just over a year ago, and never actively shared on social media. Maybe today’s the right time. It’s a year today since Adrienne Lillian Stephens died at the Bethesda Rest Home and Hospital. I will never forget being with her and my brothers as she took her final breath. She had gone by then. Nor will I forget the aroha and manaaki with which we were surrounded in the days after; the friends and whānau (especially her best mate Vana) who came from near and far to do her honour. Never will I forget the care and love the staff at Bethesda gave her and us in those weeks and days. After she died, they asked us to leave the room for just a few minutes do they could tidy her up. They plaited her hair. They put fresh flowers in the room. She was beautiful.

I’m not sure how to mark this kind of anniversary, and when I re-read the post below, I figured that sharing something I had written at 3am in the midst of the grief of that time would be OK. I hope so. So much has changed in the last year, so many tears shed, and yet life has carried on. E tōku Māmā, ka heke anō ngā roimata…

Are there any such things as ghosts of those who still cling to life, I wonder? I feel my mother here in her house, the house where I grew up. I hear her, beyond the range of my real hearing, moving about the house, softly. Carrying her hot water bottle up to bed. Moving softly outside to feed the birds, the creak upstairs must be her on her way to the loo, probably clutching the ever-present transistor radio. I hear the oven door closing. I can smell her too, or at least, the tobacco smoke, that ever-present blue haze, accompanied by the hacking cough. I can sense her sitting at the dining room table ruminating over the crosswords, adding items to the shopping list, keeping up with the diary. Cackling quietly to herself over some absurdity in the paper. I hear the shuffle of the spindly wooden chair as she stands on tiptoe to peer over the top of the fence onto Papanui Road for the latest local outrage to get her juices flowing. She always watches The Road. The missing recycling bins; the occasional vandalised letterboxes; and the sniffy reproachfulness of Her Next Door, who (apparently) everybody round here loathes. The Road is a living stream of cars, people, dogs, bikes, news, and the rumbling buses belching their payload of gritty exhaust fumes, mimicking little earthquakes that nobody needs. And then there is her little green oasis nestled between the house and the fence. The place where the birds come to feed and talk. The broken birdbath, the dishes with honey water and the containers with breadscraps. I can hear her “took-took”ing to the birds. Not those bloody starlings though. No truck with those bloody bullies. Wax-eyes, sparrows, fantails…and before the earthquakes, the hedgehogs. We wonder where the little hedgehog family went to, four years ago. She misses them.

I am sitting here at 2am in the morning and I am waiting for the bang of the poker on the floor upstairs to let me know it’s time to Turn That Bloody TV Off. I’m waiting for the turn of the handle of the door into the hallway and for her to drift into the room on her way to put the kettle on. She’s going to be pretty mad. Never the tidiest of people, I have let the lounge in which I am camping turn into, well, a freedom camper’s paradise. Minus the poo, at least.

So I can hear all these things and see them all too, if I close my eyes and block out the Emmerdale marathon on TV. But she isn’t here, and she never will be again. At least, I don’t think so. Not until she lies here and we gather for her.

My mother is sleeping fitfully, no doubt, a few streets over, at the Bethesda Rest Home & Hospital. Her mind and body wander now, and she is waiting for the close of this chapter. I’ll go back tomorrow to sit with her. I’ll marvel anew at the kind of ethereal beauty that has come upon her recently as she slips just a little further away from us. She slips in and out of this world and then she’ll blindside me with her wit and knowingness. And then she’s off again into a world we can’t really enter. Her knees are enormous. That’s what happens when the flesh disappears from every other part of her body. Joints become bulbous.

Smoking, the one thing that gave her The Passenger, as she calls her tumour, the one thing that put her in hospital last month and into 24 hour end-of-life care this month, is also the thing that gives her days rhythm, her movements purpose. The crosswords and diary sit unfilled, except by us, her children, as we try to fill in the gaps, perhaps to hold out to the world that there is still continuity with that old life. Twice a day comes the pilgrimage, the slow wander with the walker, or lately, the wheelchair, to the scruffy green patch, with the tables and plastic chairs, where she lights her cigarette, breathes deeply, and sighs in contentment. The smoke floats around her like a deadly nimbus; but the irony still pinches. That one thing that puts her here, is the one thing that gives her any remnant of her owned life now. She picked up her first cigarette at the age of 15 in Eastbourne, about the time she left school and her parents divorced, around 1951. She thinks she pinched one of her dad’s. Well, they all smoked. And now, she revels in the camaraderie of the shunned. She smokes out here with the staff and with a couple of the residents. She’ll smoke alone if you let her, and the cigarette perches weakly between her fingers with the ash always threatening to drop onto her lap. The smoke wreathes me too, and I breathe it in.

The other day one of the new nurses joined us; a lovely young lady in her twenties. As my brother said later, she knows, surely, that my mother may be her future. If so, she gives no sign, just her kind smile.

So much kindness at that place. When she had a terrible pain break through the slow-release morphine fug yesterday, our mother wept, and her eyes were wide with fear. I pressed the call-button willing my own tears to stay inside, and within seconds the nurses were there, bustling, stroking, soothing, administering, watching. “Don’t scare me like that!’ said one, not because the situation was beyond her ken, but because she just didn’t want my mum to be in that terrible pain. Neither do we.

Well. Perhaps time to try and sleep again, before the tears burst out again and the sounds of my mother’s not-yet ghost once again inhabit these quiet hours. 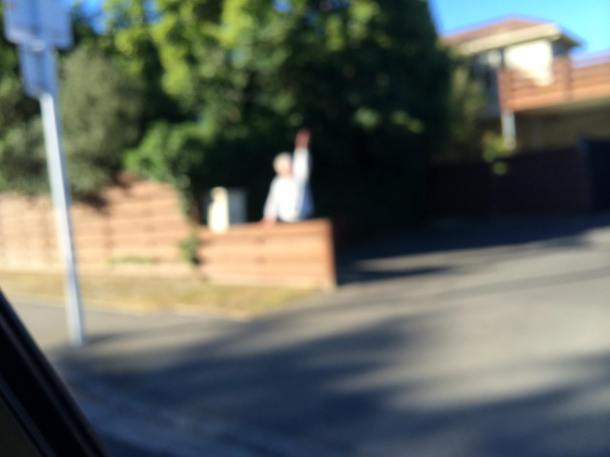 A road trip around New Zealand, in a caravan

Psychology in an Indigenous world

Coping with depression through prayer, poetry, and flying plastic

Revitalizing the Christian imagination through painting, poetry, music, and more

Tracing the identity of Jesus through history, art, and pop culture

An Episcopal Priest's Sermons, Prayers, and Reflections on Life, Becoming Human, and Discovering Our Divinity

Talks and writings by Pala Molisa